A change in the weather

Yesterday was relatively quiet on the Rock with the main new arrival being 2 Dotterel at the Reservoir. Remaining birds included 2 Blue-winged Teal, 1 Ring-necked Duck, 3 Little Stint, 2 Lesser Yellowlegs, 1 Pectoral Sandpiper, 1 White-rumped Sandpiper and 5 Glossy Ibis in the caldera with the Rough-legged Hawk/ Buzzard seen over the reservoir, a Red-eyed Vireo at Do Vinte, a Willow Warbler at Tennessee Valley and the Semipalmated Sandpiper still at the old harbour and presumably the same bird seen at the reservoir.

Today saw a complete change in the weather from clear skies and temperatures approaching 30 C to heavy rain and a brisk south west breeze. Conditions are set to deteriorate further (or rather improve from a birding perspective)  as the weekend progresses as Hurricane Ophelia swings past the Azores by Sunday. The source of the system is East / Central Atlantic so the expectation for American vagrants is not particularly high but the possibility of good sea watching is. In the past, tropical species such as White-tailed Tropicbird, Magnificent Frigatebird and Trindade Petrel have been recorded in the autumn on Corvo and Flores so tropical species are possible.

Even more encouraging there was a small arrival of new american vagrants headlined by a Blackpoll Warbler in tamarisks near the village, a presumed American Great White Egret ,Spotted Sandpiper and 2 White-rumped Sandpipers.

Rarer still for Corvo, a Curlew Sandpiper was at the Old harbour- one of the few island records. 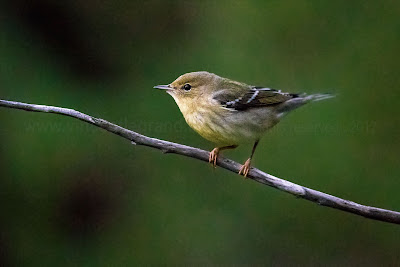