The continuing blustery northeasterly resulted in the flight being cancelled again. Conditions which were too extreme for an aeroplane to travel in did not stop a 7g bird arriving from Siberia to Corvo today, a Yellow-browed Warbler,  the furthest west this species has ever ventured. Needless to say, this was the first record for Corvo and a nice compensation for all those who were stranded on island again.

A few other birds arrived from the east including 2 Skylarks, 1 Pintail, 1 White Wagtail and 1 Chiffchaff. 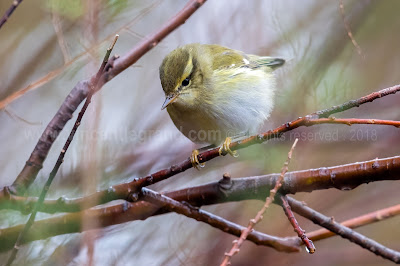