Yellow-throated Warbler - new for the WP!

The morning started with plenty of optimism - the winds were in the west and yesterday's American Robin had given us all hope. It didn't take long for the first bird to break - a Yellow-rumped Warbler, found by the Polish team in the robin spot. A taxi load rushed up there, but unfortunately the bird had soon disappeared and those arriving all dipped out.

The peace didn't last long, though, as Kris de Rouck had brief views of a White-throated Sparrow above the caldeira road, just a few hundred metres from the robin spot. As birders made their way towards the site, momentous news was then broadcast over the walkie talkie - Josh Jones had located the Western Palearctic's first Yellow-throated Warbler in the junipers at the very top of Poco d'Agua! Panic ensued as the rest of the birders on the island made their way to the site, though the bird had disappeared seconds after being found. Fortunately, though, Michael Fricke soon located the bird 100m above its original location and, for the next fifteen minutes, it gave great views in the junipers as it worked its way up the valley. Sadly though, it soon disappeared from view as it flew over the assembled birders heads, down the valley and despite searching, was not seen again by dark. 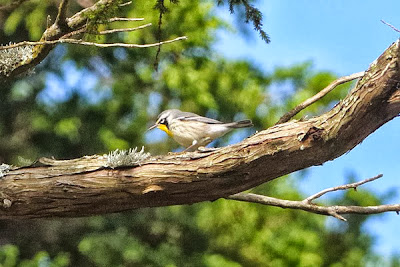 Hannu Palojarvi then relocated the White-throated Sparrow up above da Ponte and most of the warbler twitchers enjoyed their lunches as the sparrow gave ridiculous views on the caldeira slopes. A beautiful first-winter, the eyestripe was tinged brown but the supraloral was a fine shade of yellow and the wings were a bright chestnut. 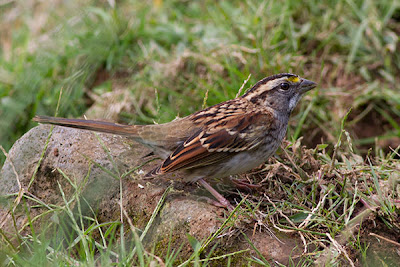 The weather worsened throughout the afternoon with the wind picking up. As such, no new birds were found but birders on the island learned of two Canada Geese - seen by Tommy Frandsen, Jens Sogaard Hansen, Ernie Davis and others over the Lighthouse Valley, where the Black-and-white was also still present. The Mourning Dove was also frequenting its favoured spot in the village again this evening.
Posted by Josh Jones at 16:25